In February 2012 I visited Australia for the first time. On this fateful trip, I conducted a little survey with every Australian I met by asking them: “Would you say you’re happy?”…not confronting at all, right? 😂

But I was in shock. I couldn’t believe this magic place existed. A place where in some ways, everything was the same as where I came from: people worked 9-5, rode public transport into the city, spent the weekend hanging out with friends. Except it didn’t feel the same, it didn’t feel the same at all. It was sunny, warm and the ocean – the ocean – was right there. And nature. And so much green. I met people who had the exact same job as me, but lived in Bondi beach. They lived in a place that I had spent years dreaming about, finally getting up the courage to visit for a few weeks.  They would go to work, then come home and go for a surf! They would hang out with their friends on the grassy knoll on weekends and then head to someone’s house for a barbie (barbecue to the uninitiated) to finish off the day. They had 20 DAYS OF VACATION a year. They were allowed and encouraged to take unpaid leave. They also smiled a lot and seemed very relaxed. There was a general sense that these were people who were enjoying their life as they were living it. It was not about someday – it was happening right now.

But I had always loved Australians, from my fateful days spent on a little island in Greece during two uni summers, when I became friends with a group of them. I loved their easy going, straightforward attitudes. They were just generally good and decent people and so much fun.

So when I asked the “happy” question, the immediate reaction was “…ah, what?” Haha. But then in true Aussie fashion they would “give it a go” and their responses were always along the lines of “Yeah, I guess I am!”. 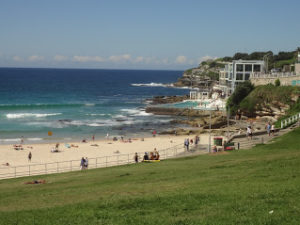 All the blues and greens

This gave my Toronto-conditioned brain a real jolt. If I’d asked the same question back home the answers would have been along the lines of “I can’t really complain, it could be worse” to the classic “…is anyone really happy?”. This general attitude of complacency – or acceptance, by virtue of it not being “as bad” as something else – never sat well with me. I didn’t get it. I didn’t understand how you could think like that and be able to find the motivation to go forward. By this point I’d already experienced some really big highs and lows in my life and my whole adulthood in Toronto felt like one long string of baseline “meh”ness. The moments of existential despair had overtime become more and more frequent. I found myself constantly thinking…how could this really be as good as it gets?

Well, it turns out it wasn’t. At least not in Australia. The secret was out! (to me). I had found the place that made sense to my brain. The place that made life worth living. I had peeked behind the curtain, I had seen the emerald city and there was no going back.

I spent the last day of this fateful first trip by myself. I walked through the city and suntanned at Bondi beach. I observed everyone and everything. I soaked up as much as I could and wrote it all down: the things people said to each other, the difference in attitude, my complex feelings of wonderment. I promised myself to find a way to somehow live like that back in Toronto. I was blown over, but I still didn’t see how that amazing place could ever be MY life. I didn’t dare dream that I would actually live there one day. That Bondi would be my backyard. That I would swim every morning in that beautiful, freezing cold sea. That I would get so used to sunshine that a rainy day would be welcomed.

Six months later I applied for my Australian Working Holiday visa. A year and a half later* I was living in my apartment in Bondi.

And that’s how my love affair with Australia began.

*A whole hell of a lot went on in between then (hello separation from my partner, living a wild life in Costa Rica, working on a farm in small town New South Wales), but that would literally take a novel to write…or many, many more stories.